Have you ever started to write a story or tell a story and somehow it seems to fall flat? Maybe I was trying too hard.  I wanted to write  about when Grandma Gill gave me her mother’s ring.

Long story short (since I failed at the long story),  Grandma decided on one of our weekly Sunday afternoon visits that she wanted to distribute some of her things. This was in the summer of 1976.  Grandma was about 80 at the time.  I was 15, but still felt like a little girl when I was around my grandma.  Grandma was failing in health and mind and I guess she decided it was time. The first thing she took out was her jewelry box and out of that she withdrew her mother’s ring. She asked which of her daughters would like it. All four of them, Mary, Inez (my mother), Evelyn, and Doris were there. All of them were appalled Grandma was trying to give away her jewelry, especially her mother’s ring and all refused to take it! This hurt Grandma’s feelings mightily. She turned to me and asked me if I would like it. Seeing how hurt she was and feeling honored that she offered it to me, I told her I would love to have it if no one else wanted it. Mother was appalled because she thought it made me look “grabby.” Nonetheless, Grandma was delighted and put the ring on my finger. It was much too large and still is, but I love it and cherish it because it was Grandma Gill’s. I loved her dearly.

I also have a ring that was my second cousin, Cassie Price’s, ring. She never married and was like an aunt to me. When she passed away in her 80’s, her brother and his wife told me Cassie wanted me to have some jewelry of hers. I was one of the few people in the family with fingers as small as Cassie’s were, so I was given this lovely ruby ring, which I wear often.  I treasure it because I remember seeing Cassie wear it frequently. She was a lovely person. I only wish I could be as elegant as Cassie. She was the true definition of a refined lady.  I’m the true definition of a Texas tomboy I think!  (Please forgive this awful picture.  Not my prettiest hand shot, but an honest one.  When you work your hands as hard as I do, they tend to age quickly.) 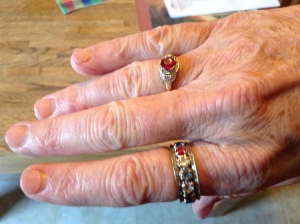 And now you know the story of two of the family rings!  There are other rings with more history, but those stories will be told another day.  I think I’ve blabbed on long enough for anyone!  Hug someone tonight and have a great evening!

I'm a native Texan who moved to Colorado in 2007. I was born and raised in Lubbock, Texas and still have a Texan twang of which I’m proud. I love God, people, and life! I love helping people. I love writing and reading. I love crafting. Whatever I am doing, I do it with all my heart and all the energy I can muster up! View more posts